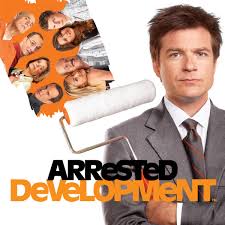 If you love unorthodox sitcoms with lovable characters and hilarious running jokes, watch Arrested Development. You probably won’t even need to read this review to know you’ll like it.

And now the review from a student who had no choice but to put out content for his school newspaper. Arrested Development follows the Bluth family after the patriarch is arrested for fraud. Michael Bluth (Jason Bateman) has to keep his family together despite him not wanting to. His family includes his son George Michael (Michael Cera), his sister Lindsey (Portia Del Rossi), her husband Tobias Funke (David Cross), their daughter Maebe (Pronounced Maybe), Michael’s brother George Oscar Bluth aka Gob (Will Arnett), his youngest brother Buster, his mother Lucille (Jessica Walters), and his father George (Jeffery Tambor). Every one of these characters has a moment to shine in almost every episode. Tobias leads to some of the funniest running jokes throughout the series as do Gob’s attempts to be taken seriously as a magician. What is surprising about the show is its level of humanity. You find yourself caring for every one of the characters despite the majority of them being selfish and often completely oblivious.

This series definitely benefits from binge watching. There are several running gags that get funnier every time they happen. Some are more easily spotted where others will often come up in the background. One of my personal favorite involves the use of the sad music from the Charlie Brown christmas special. There are many celebrity guest stars on the show that have recurring roles. Carl Weathers plays an overexaggerated version of himself, Ben Stiller plays Gob’s rival magician Tony Wonder, and Charlize Theron even has a hilariously memorable role as Rita. I can say without a doubt that there was not a single episode where I was not laughing. Hilarity and chaos follows the Bluth family, and there is much fun to be had watching it.

Arrested Development ran for three seasons before being cancelled but was later picked up by netflix. While the fourth season, which was produced by Netflix was not as good as the previous seasons it is still worth watching as the jokes keep coming. This show has an excellent family dynamic where you can tell that all of the characters care about each other even though they often try to be as far apart as possible. This show is greatly enhanced by the talented cast. Every actor owns their role and it is impossible to see other people playing their characters. Whether it is Jason Bateman’s good guy Michael or David Cross’ oblivious psychiatrist Tobias, they all fit their characters amazingly. All the praise given to this show is definitely deserved. This show finds the perfect balance between humor and heart with a fantastic cast of over the top but lovable characters and hilarious running jokes. If you are looking for a more light-hearted television series that can still be binge watched, then this is a show you need to see.

Rating: Definitely worth watching, for hours at a time.