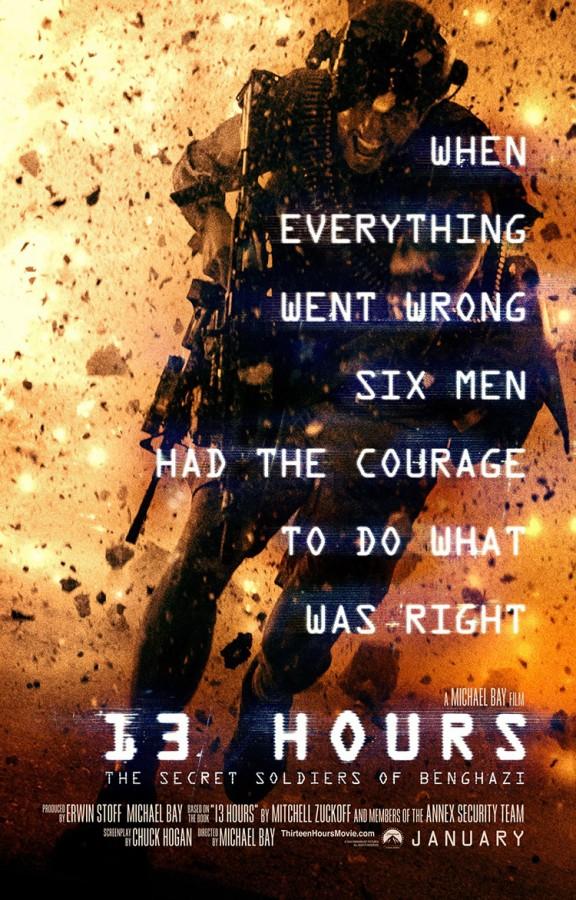 13 Hours is the newest film by director Michael Bay and is a portrayal of the Benghazi attacks that occurred September 11, 2012. The film’s cast is led by The Office’s John Krasinski and the central characters are members of the security team who held off the attackers. This is Michael Bay’s third attempt at portraying a true story. His past two attempts (Pearl Harbor and Pain and Gain) left much to be desired and the last films he has made in general were hated by many. Could 13 hours be Michael Bay’s redeeming film?

13 Hours is far from the worst film Michael Bay has made in recent years. The film does a good job at respectfully depicting the main characters who were based off of real people. Some of the action scenes were actually very enjoyable. The R rating is something that may drive people who aren’t fans of violence away, but it helped keep 13 hours from being generic. While the action is occurring the film is fun, even if the action sequences are not anything special.

However, there are a lot of issues I had with 13 Hours. The script was lazy and it really showed when John Krasinski was attempting to do as much as he could with the poor dialogue. There is a lot of comic relief in the film which is sometimes childish and does not seem like it fit in the situation. Often times the film was somewhat and unnecessarily offensive. A lot of the earlier sections of the film could have been removed as they did not really add much to the characters except for drive in the fact that all of them had families back home. Some action sequences, most notably one car chase, seemed to exist only for a punchline.

While the action was reminiscent of Black Hawk Down (One character even directly mentions this) it feels more like a Call of Duty mission than a depiction of real events. It was not until the final sequence that any stakes were felt. The earlier action sequences, and a few sections of the main attack, are poorly filmed. However, for the bulk of the main part of the film the action is presented so you can clearly see what is going on.

While I did have issues with the film, I had fun with it. 13 Hours is not going to be on anybody’s best of 2016 movies list, but for a movie coming out in January (Which, if you are unaware, is filled with mostly horrible movies) it is certainly better than most. If you are into the military-based action films that are heavy on violence, you will most likely have fun with 13 Hours. However, I would recommend waiting until other movies to come out instead. This is not a film for people looking for something with more substance or a film that delves deep into the events behind the Benghazi attacks.

Rating: 13 Hours is not a great movie, but that doesn’t mean it isn’t enjoyable.