The Beauty and Background of Berlin 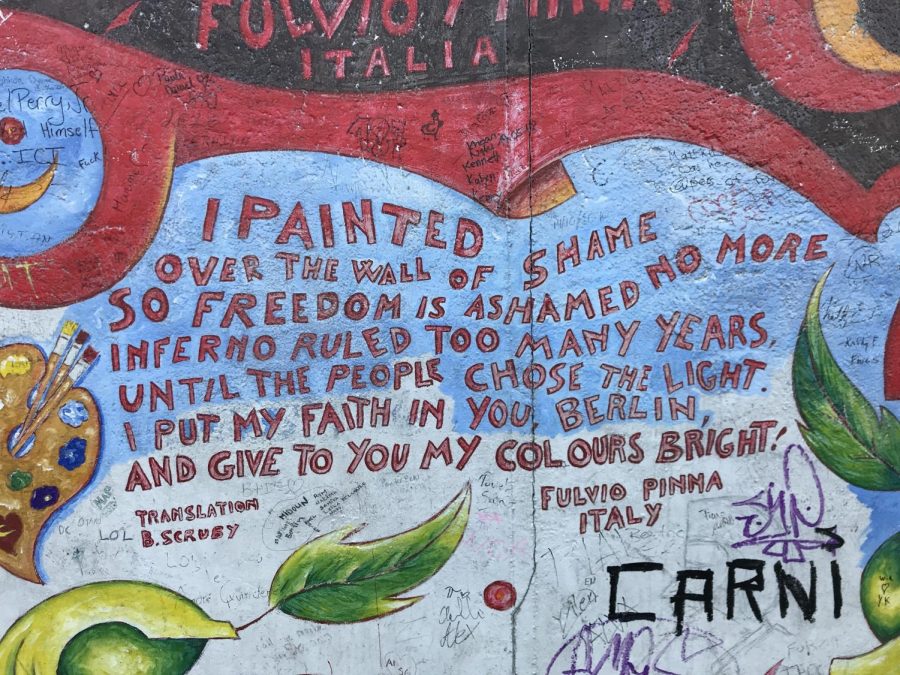 Walking through Berlin, Germany takes you through a history of a country that has faced an incredible amount of internal division and struggle. The modernized streets are filled with restaurants, some packed with tourists and locals, others desolate and run down. Conversations can be heard in German and English, along with scattered other languages mixed into the array of culture. On street corners, markets often can be found, including companies selling things they’ve made or people trying to make some money off of old items found in their houses. Based on this, you wouldn’t be aware of all the turmoil that has occurred in the past little over a century. However, the details of the street–the graffiti, stones in the ground, and popular attractions–show this past. Looking deeper, you find a country that wants to move on without forgetting.

Among the skeletons of Berlin’s past lies one of the largest genocides in the history of the world, the Holocaust. Around 6 million Jewish people were killed in the 1940’s throughout Germany and Europe. Despite the horrors that the citizens of Berlin feel about this event in their history, it is clear just by walking down the streets that they have no intention of forgetting about it and moving on like nothing happened. They have been learning from it for the past 50 years. This is evident on the streets in Berlin, where there are small plaques bearing the name and birth/death date of a Jewish victim, or other group such as homosexuals or disabled people targeted because of the Holocaust. These are called Stoplersteins or “stumbling stone” and represent someone’s last place of residence or work before being captured and killed by the Nazis. The point is to commemorate the people who fell victim to this horrible event and show that despite moving on, Germany is in no way forgetting what happened. There are museums scattered around such as the Topography of Terror, which show the history of the gruesome holocaust and how it came to be. It shows this history as a learning point, as to not repeat events like this one.

Berlin also faced inner turmoil during the time that it was separated into East and West sides by the Berlin wall. Occurring when the Cold war began between the Soviet Union and Western Europe, the country was divided by opposing ideology. This was demolished between the years of 1990 and 1992 by civilians and officials as an act of desegregation and reunification. Parts of the wall still stand and are major tourist attractions, with people walking up and down the sidewalk looking at all the graffiti that the city is also known for, symbolizing the end of Berlin’s disunity. Some of this is just art or the simple signing of a name, but some has a much deeper meaning. For instance on the sections of the Berlin wall at the East Side Gallery, there is a lot of art with a historical significance. Among this is phrases and drawings representing how the world needs to build bridges, not walls, pictures of two men kissing, and other activist drawings. You can feel the power and strength shown by the men and women who overcame this and created a unified Berlin.

Upon first glance, a historic and beautiful city, one can only truly appreciate it by delving into its past and understanding how it came to be the place it is today. Despite the hardships, confusion, disunity, and genocide faced by the population throughout time, it is now a flourishing and well rounded city, with friendly faces everywhere and signs of hope all around.