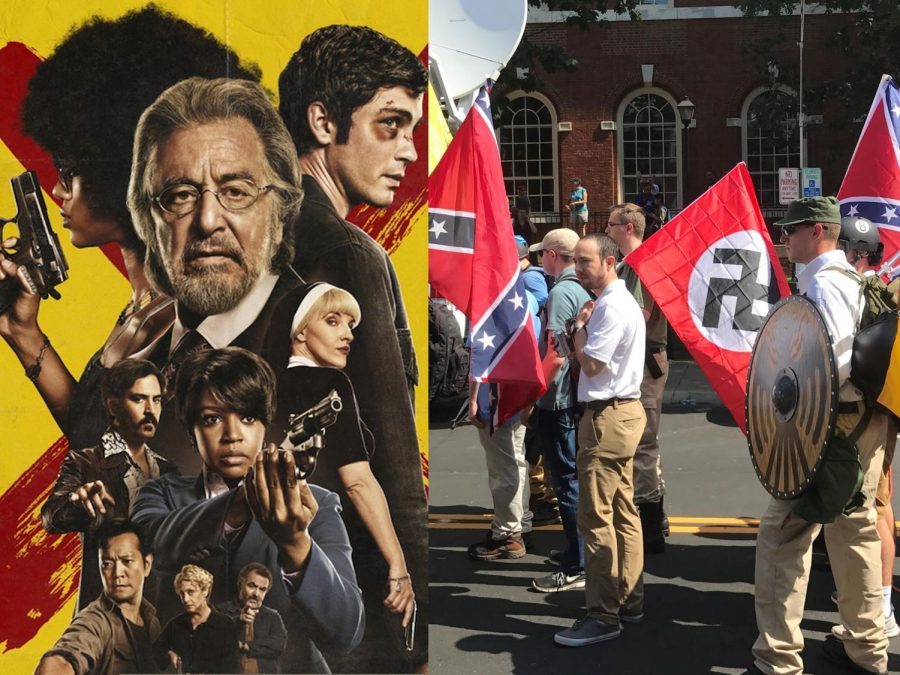 Amazon Prime Video’s new show Hunters is about a group of Nazi hunters stopping a scheme to install a fourth Reich in America. The Nazis this group is fighting are embedded in the US government. The show takes place in 1977. Unfortunately, bigots and Neo-Nazis in the government are more than fiction produced by Jordan Peele. The invasion of hateful ideology into American politics is a very real and pressing issue.

Bigotry goes unpunished and uncorrected in today’s America. A 2018 official press release from the Department of Homeland Security read “We Must Secure The Border And Build The Wall To Make America Safe Again.” This fourteen-word title was in a coded reference to another fourteen words, a quote from American Neo-Nazi David Lane expressing fear that the Jews are trying to destroy the white race. That ur-text reads, “We must secure the existence of our people and a future for white children.” Both quotes start with the same words and are fourteen letters long. The Anti-Defamation League lists fourteen words as a hate symbol. In the same release this statistic was used, “On average, out of 88 claims that pass the credible fear screening, fewer than 13 will ultimately result in a grant of asylum.” Using 88 as a number for a statistic is very odd and is done for no apparent reason. In actuality, the reason 88 is used is because it is a classic symbol among Neo-Nazis meaning Heil Hitler (H is the eighth letter of the alphabet, so 88 means HH means you know what.) Despite public outrage over blatant dog-whistling the release is still on the DHS’s website today, two years later, unchanged.

This ideology is also detectible among law enforcement, and almost always goes unpunished. Only a half an hour away in East Hampton a police officer was found to be a member of the hate group Proud Boys. The Proud Boys are neo-fascists who encourage political violence and identify as male chauvinists. The officer faced no repercussion for his ideological and financial support of the group. Obviously, an officer of the law who believes in hateful acts of violence is dangerous. On top of that, police brutality is rarely punished in America, which is the reason Black Lives Matter exists, so if Officer Proud Boy shot someone he would likely face no prosecution. A similar culture has also been found among border patrol agents. A secret Facebook group revealed that sexism and mocking/joking about dead immigrants was far from rare among these agents.

Hate also makes its way into politics in the way politicians express their views and discuss current events. This is very obvious in the way groups like the Proud Boys are discussed compared to groups such as Antifa. Both encourage violence, but Antifa is viewed as terrorism by many and Proud Boys are just using free speech. It was also evident in the President’s remarks that there were “very fine people on both sides” in response to the Unite the Right rally in Charlottesville which ended in the killing of Heather Heyer by a White Supremacist. A refusal to disavow bigotry is an endorsement of bigotry.

In addition to this there are Neo-Nazi lobbyists like the Liberty Lobby who’s leadership blame the world’s miseries on Jews. There are also direct endorsements and expressions of hate all over US politics. Rush Limbaugh, a repeat-offender racist and all-around rude guy, was recently awarded a Medal of Freedom; other recipients include Rosa Parks, Nelson Mandela, and Jackie Robinson. Another recent example of an expression of hate is the alienation of congresswomen Rashida Tlaib and Ilhan Omar for being Muslim. Ilhan Omar has faced constant ridicule and accusation of anti-Semitism for her views on the Israeli government. Really, this shows an acceptance of the anti-Semitic doctrine that Zionism equates to Judaism.

Watching a TV show for fun is okay. But it is crucial that shows like Hunters do not make hatred in the government seem like a problem of a bygone era. It is an issue that needs to be called out and  addressed.