LOLHS and The 2020 Presidential Election 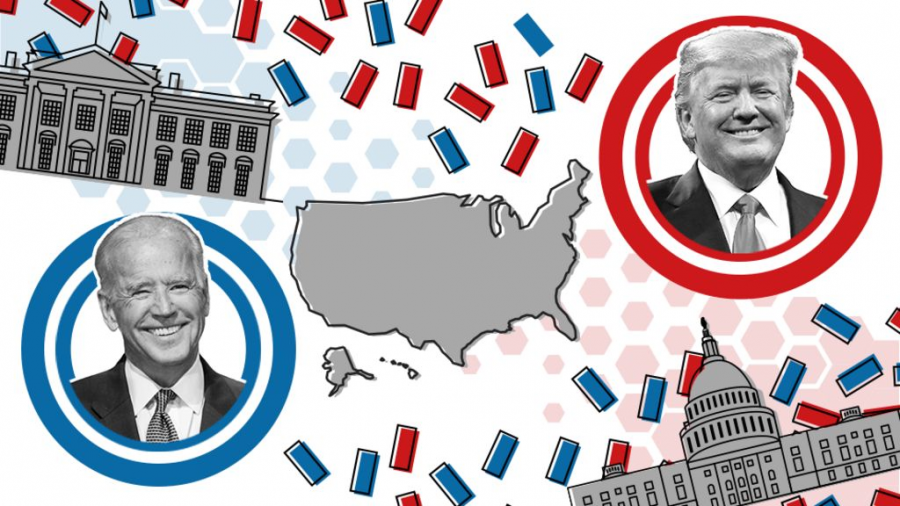 The 2020 presidential election is right around the corner. President Donald Trump and Vice-President Joe Biden lead opposing campaigns that differ on more than just subtleties. As of October 28, Real Clear Politics polls show Joe Biden leading Donald Trump 51% to 43%, but a tremendous number of electoral votes are still hotly contested, as 171 out of 538 are still considered toss-ups.

Despite the fact that the majority cannot yet vote, The Osprey decided to randomly sample Lyme-Old Lyme students to get a feel for their preferences, and some sense of the issues that are important to them.

Young men and women in our school were evenly split in their support for the two candidates. When questioned about the rationale behind their support, both sides cited ideological beliefs that the opposition’s presidency would pose a grave threat to American democracy.

Supporters of Donald Trump first characterized Democrats as “socialists”, intent on destroying capitalism, and suggested that Joe Biden would never be able to control the radical end of his party. They then hailed Trump’s pre-pandemic economic gains, his America First philosophy, and his global diplomacy on the Korean peninsula and Middle East. They also mentioned his tax cuts, historically low unemployment rates, support of police, and his success in stemming illegal immigration.

Joe Biden supporters railed against Donald Trump’s lack of honesty and character, as well as what is perceived to be a desire to subvert our democracy and establish an autocracy.  They claim he has failed grossly in his handling of the Coronavirus pandemic. They believe his failings in international trade have damaged American industry and agriculture instead of aiding it. U.S. farmers alone have had to receive $28 billion in subsidies to remain solvent in 2018-19 as a result of trade war with China. They claim that, in diplomacy, our traditional strategic alliances have been damaged, and economically, tax cuts have disproportionately favored the wealthy while clean air and water regulation has been rolled back to allow industry to become more profitable.  They also stated that all perceived economic benefits have been outweighed by the worsening of an unprecedented national debt. These students refer to his approaches in halting illegal immigration as inhumane, and Biden supporters also accuse Donald Trump of deliberately stoking racial tension and division within the United States.

This sampling also revealed not a single undecided or apathetic hypothetical voter.

If Lyme-Old Lyme High School is any kind of barometer, this is going to be a very interesting election.

The Osprey encourages all who are registered to get out and VOTE!