Take the Pledge Out of School 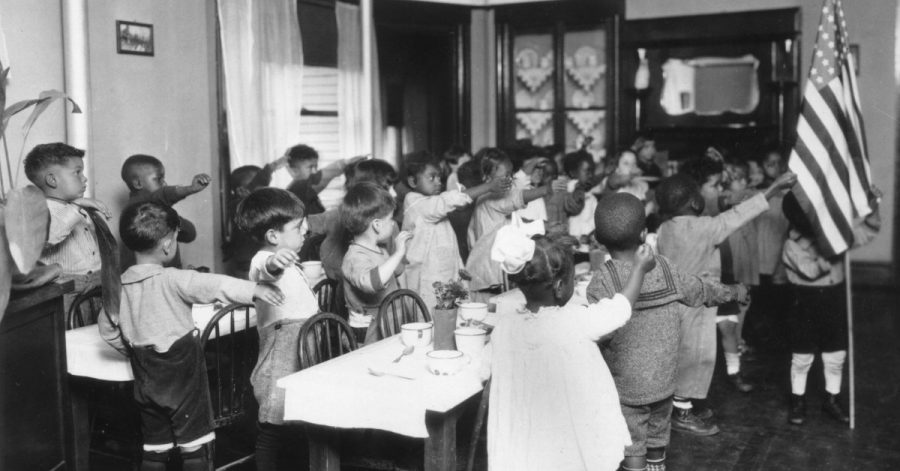 1939: Children reciting the pledge of allegiance in an Elementary School classroom in Los Angeles, California. (Photo by MPI/Getty Images)

Second period of the day, like clockwork, the intercom clicks on. Students, instructed to rise for the Pledge of Allegiance, place their hands on their hearts and mumble out the same words:
I pledge allegiance to the Flag of the United States of America, and to the Republic for which it stands, one Nation under God, indivisible, with liberty and justice for all.
After its recitation, little thought is given to this daily covenant. Despite a seeming insignificance, the Pledge is a dangerous oath.

The version of the Pledge of Allegiance said in schools today came about in 1954 upon the addition of the phrase “under God”. The pledge was originally written by Francis Bellamy; who, despite his piety, was an abhorrent racist. He once wrote on the topic of immigration: “There are races more or less akin to our own whom we may admit freely and get nothing but advantage by the infusion of their wholesome blood. But there are other races, which we cannot assimilate without lowering our racial standard, which should be as sacred to us as the sanctity of our homes.” How is it that the pledge he wrote became the most popular mantra of patriotism? The pledge used to be ended with raising an arm to the flag; this practice was jettisoned as it was too similar to the Nazi salute.

Returning to the “under God” line, such a religious statement seems out of place in a secular pledge. Talk of God intertwines the asserted patriotism of the pledge with Christianity. Many argue that the pledge does not specify which God it refers to, but to pretend it’s not obvious is absurd. This line sends an uncomfortable message to non-Christian Americans, this is a Christian nation. The line also goes against the spirit of a secular government and forwards a narrative that those who do not recognize God are un-American.

Not only do we pledge allegiance to our nation, but more specifically its flag. The flag has always meant more than a piece of fabric in waving in the wind. Right now, the American flag represents far-right nationalism and governmental tyranny to too many. Propagandists like FOX News brand kneeling before the flag as disrespectful. Two sides are drawn, the pro-flag full-blood Americans, and the flag-burning Black Lives Matter Socialists.

The flag is also the symbol of our military. In the same way many see the troops in the flags, others connect it to the monstrosities of American imperialism. It is the flag worn by war criminals in the middle east, The flag was painted on planes that dropped chemicals on civilians in Vietnam, and it flew over internment camps in the Second World War.

Students are expected to pledge their allegiance to that flag every-single-day.

The flag is an idol, and its pledge a hymn. Students are taught to worship a government that is far from infallible. An American should hold allegiance to their people, and  to the people of the world. It is the value that founded our nation, people give power to the government. The republic is allegiant to us, we have the power. Beware of indoctrination to a government that may call upon you to sacrifice yourself, not to the people, but to the deity of the flag.